HOUSTON – Houston  lawyer for executives Joseph Ahmad is a panelist on a Texas State Bar live webinar Tuesday December 7, 2010 about the changing Texas law on trade secrets and non-compete agreements. Mr. Ahmad, a partner in Houston-based AZA, is a nationally known  lawyer who specializes in representing executives. Ahmad, who was recently elected to the […]

HOUSTON – Noted lawyer for executives Joseph Ahmad of Houston’s AZA has been elected to the American Board of Trial Advocates, an elite group of the country’s leading judges and civil trial lawyers. Mr. Ahmad earned the selection based on his efforts to “elevate the standards of integrity, honor, and courtesy in the legal profession,” according to ABOTA. “I’m […]

HOUSTON – The attorneys at AZA continue to add to their growing list of accolades with recent recognition from The Best Lawyers in America, U.S. News & World Report and Texas Super Lawyers magazine. Earlier this month, the firm was singled out as one of the top law firms in Houston following a national survey conducted by the editors of U.S. […]

HOUSTON – Houston’s AZA is earning recognition alongside some of the country’s largest law firms in a national survey of corporate counsel identifying the top U.S. law firms that companies don’t want to face in court. The 17-lawyer AZA Law Firm is named an “awesome opponent” in the survey conducted by Wellesley, Mass.-based BTI Consulting Group, […]

HOUSTON – AZA is proudly announcing the addition of three impressive lawyers to its stable of commercial trial lawyers. The new hires include a computer programmer with international arbitration experience, an energy sector litigator who has written and edited in that field, and a recent University of Chicago Law School graduate who has worked for […]

Dallas – AZA, a certified minority law firm itself, was recognized as the top sponsor at the 18th Annual Texas Minority Counsel Program at the Four Seasons Resort and Club Dallas at Las Colinas. The September 2010 event for the State Bar of Texas Office of Minority Affairs’ minority counsel program brings together minority and women […]

AZA filed suit on August 25 against Ernst & Young on behalf of investors who lost millions of dollars following the collapse of a Plano, Texas-based hedge fund that promised low-risk investments. The lawsuit focuses on two funds sold by Plano’s Parkcentral Global and was filed on behalf of Houston financial consultant Gus H. Comiskey […]

Attorneys say ruling will facilitate communication among victims of poorly run funds WILMINGTON, Del. – Attorneys from Houston’s AZA helped a hedge fund investor earn an important ruling at the Delaware Supreme Court that will allow investors in failed hedge funds to investigate their losses as a group while coordinating potential legal actions. The law […]

Joe Ahmad to speak at the American Bar Association 2010 Convention

Joe Ahmad will be speaking on ”The Generational Effects of Juror Attitudes” at the American Bar Association 2010 Convention in San Francisco today, Friday, August 6, 2010.

When one of the nation’s largest pipeline companies was the subject of a $160 million preference claim, it turned to the trial lawyers at AZA to fight the claim in Bankruptcy Court in Delaware. AZA defended the claim aggressively, including by immediately pressing for its outright dismissal. Eventually, the Litigation Trust that had authorized the […]

AZA Continues its String of Victories in Trade-Secret Litigation

Our lawyers have handled many trade secret cases at all stages of litigation. Most recently, AZA lawyers Elizabeth (Lizzie) Pannill and John Zavitsanos won a week long temporary injunction hearing on behalf of MISTRAS (NYSE: MG) in a suit brought by a MISTRAS competitor who alleged that MISTRAS misappropriated that company’s trade secrets. The temporary […]

Joseph Ahmad, Demetrios Anaipakos, and John Zavitsanos have again been included in the 2010 Edition of Best Lawyers in America. This is the most prestigious peer reviewed award on a national level. Inclusion on this list is obtained only from voting by other lawyers who have achieved a similar distinction. www.bestlawyers.com. Our lawyers were included in […]

When former news anchor Wendy Corona sued her one-time News Director, Nancy Shafran, Ms. Shafran hired the trial lawyers at AZA to represent her. Ms. Corona’s lawsuit, which was covered in the media, sought nearly $3.25 million in actual damages, punitive damages, and attorney’s fees from Ms. Shafran and her co-defendants. In less than 6 […] 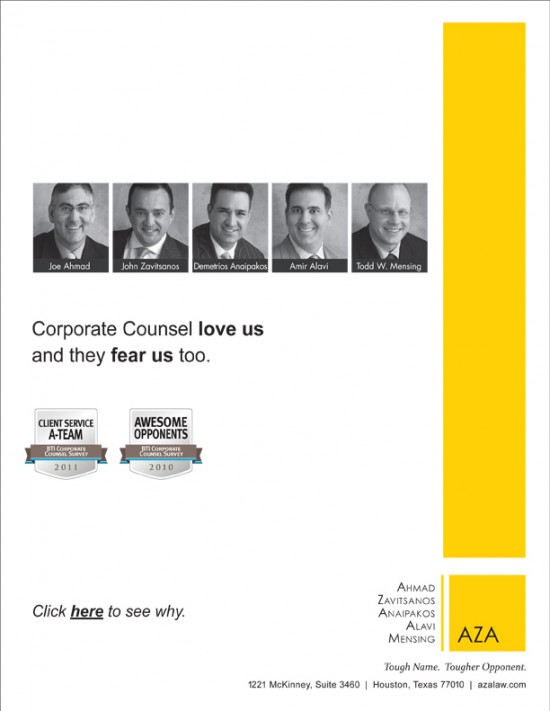