HOUSTON – The operators of a network of wound care clinics have paid $4.3 million to the federal government to settle claims that they billed Medicare for treatment by unqualified therapists, ending a lawsuit by a Houston doctor who blew the whistle on them. Dr. Caroline Fife, a specialist in wound care and professor at […]

HOUSTON – Three attorneys from the complex commercial litigation and intellectual property boutique Ahmad, Zavitsanos, Anaipakos, Alavi & Mensing P.C., or AZA, have been named to Houston’s “Who’s Who in Energy” list for 2013. Founding partner John Zavitsanos and partners Sean Gorman and Todd Mensing are all recognized as influential leaders in the energy industry […]

HOUSTON – A Texas appeals court has affirmed the bulk of a jury verdict totaling nearly $1.1 million after jurors found that a newspaper and reporter libeled the son of a former Fort Bend County chief deputy sheriff. “It’s highly unusual for a newspaper to lose a libel verdict on appeal. We are happy to […]

HOUSTON – A judge in Bryan, Texas, awarded a stunning $187,000 in attorneys’ fees to CITGO Petroleum Corp. after it won an unusually complex eviction case litigated by attorneys Monica Uddin and Alisa Lipski of Houston’s Ahmad Zavitsanos Anaipakos Alavi & Mensing P.C., or AZA. The case itself and the amount of legal fees are […]

Litigation boutique wins national recognition from The Best Lawyers in America HOUSTON – The Houston-based complex commercial litigation and intellectual property firm Ahmad, Zavitsanos, Anaipakos, Alavi & Mensing P.C. (or AZA) is being recognized as one of the country’s “Best Law Firms” yet again by U.S. News & World Report and The Best Lawyers in […]

HOUSTON – A Texas appeals court upheld a jury award of $750,000 in attorneys’ fees for AZA’s client – a ruling that means the award will stand as the fourth-largest defense verdict delivered in Texas in 2011. Attorney Elizabeth Pannill Fletcher of Houston’s Ahmad Zavitsanos Anaipakos Alavi & Mensing P.C. (or AZA) successfully defended Mistras […]

HOUSTON – Attorney Paloma Zepeda of Houston’s AZA, or AZA, recently helped Maryland’s historically black colleges win a federal ruling that the state must change education policies that give predominantly white state universities an unfair advantage. The Oct. 7 ruling by Judge Catherine C. Blake in the U.S. District Court for the District of Maryland […]

HOUSTON – The Houston law boutique AZA, or AZA, is being honored as the Texas Intellectual Property Law Firm of the Year by the firm’s clients and the publishers of Global Law Experts, a United Kingdom-based guide to leading attorneys throughout the world. AZA is named in the “Client Choice – IP Law Firm of […]

Small firm of top lawyers handles high-stakes, complex cases in U.S., international jurisdictions HOUSTON – Six attorneys from the Houston complex litigation and intellectual property law firm AZA, or AZA, are being recognized among the top lawyers in the nation for commercial litigation in the 2014 edition of The Best Lawyers in America. AZA partners […]

Firm, partners responsible for making law, among top legal counsel in the state HOUSTON – Houston’s AZA, or AZA, is celebrating two decades of legal firsts, successful work for clients and overall firm growth since opening its doors with only two attorneys 20 years ago this month. Founded in July 1993 by attorneys John Zavitsanos […]

HOUSTON – Representing American Vehicular Sciences LLC, attorneys from Houston’s Ahmad, Zavitsanos, Anaipakos, Alavi & Mensing, P.C., (or AZA) defeated a motion by Toyota Motor Corp. to change the venue of a major group of patent cases that were filed by the firm in the U.S. District Court for the Eastern District of Texas. Last […] 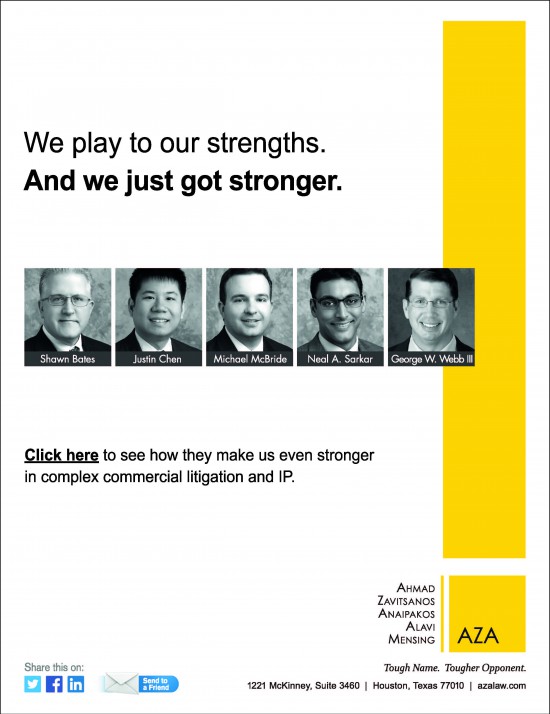