HOUSTON – Three name partners from the Houston complex commercial litigation boutique AZA, or Ahmad, Zavitsanos & Mensing, are being recognized as Local Litigation Stars in the 2016 edition of Benchmark Litigation, a national peer-review guide to attorneys. AZA also earned a recommended ranking in this year’s edition. Selected for their courtroom trial skills in […]

HOUSTON – The commercial litigation firm AZA, or Ahmad, Zavitsanos & Mensing, is being recognized for the fourth year among the nation’s Best Law Firms by U.S. News & World Report and The Best Lawyers in America. Houston-based AZA, acclaimed as a boutique that can go head-to-head against much bigger law firms, is listed in […]

HOUSTON – A Houston federal jury this week returned a verdict in favor of National Oilwell Varco, L.P., (NYSE: NOV), finding no wrongdoing in an employment discrimination lawsuit filed by eight African Americans who sought $120 million in damages. Houston-based NOV, an oilfield equipment supplier, argued that these employees were not treated differently because of […]

HOUSTON – Advice from Todd Mensing, a partner in of AZA or AZA, about effective cross examination was featured by national legal news service Law360. In the article “The 5 Worst Things To Do On Cross-Exam” (subscription required), Mr. Mensing told Law360 that difficult witnesses who try to dodge questions are a boon for the cross examining attorney. […]

HOUSTON – Joseph Ahmad, founding partner of AZA or AZA, was interviewed extensively about his trial expertise for a story by national legal news service Law360 on how lawyers should handle themselves in the courtroom. In the article “The Art of Effective Body Language at Trial” (subscription required), several leading trial lawyers across the nation […]

HOUSTON –Five name partners and three other lawyers with Houston litigation boutique AZA, or Ahmad, Zavitsanos & Mensing, have earned selection to the 2015 Texas Super Lawyers, a listing of the state’s top lawyers. Three partners, Joseph Ahmad, John Zavitsanos and Todd Mensing, also are being recognized among the top 100 lawyers in Texas, as […]

HOUSTON – A jury has found former National Oilwell Varco, L.P., (NOV) employee Royce G. Binnion Jr. guilty of first-degree felony theft for a long-running scheme in which he submitted fake invoices to his employer to steal more than $1 million he either took in cash or used to buy himself an odd assortment of […]

HOUSTON – AZA, or Ahmad, Zavitsanos & Mensing, has again earned selection as one of the nation’s “most feared law firms” by a leading research group that conducts a comprehensive survey of corporate counsel at major U.S. companies. AZA and its team of talented trial lawyers were selected through an analysis conducted by BTI Consulting […]

HOUSTON – The Houston trial law firm AZA, or Ahmad, Zavitsanos & Mensing, is one of only 10 boutique firms nationally that are being recognized by the legal news publication Law360 for successfully challenging the country’s biggest law firms. Law360 says the 2015 list of the country’s leading trial boutiques includes firms “that have established […]

HOUSTON – The Houston trial law firm AZA, or Ahmad, Zavitsanos & Mensing, again has earned recognition among the nation’s top commercial litigation firms in the 2015 edition of Chambers USA: America’s Leading Lawyers for Business. In its Chambers USA profile, AZA is described by one client as a “very results-driven law firm, and the […]

HOUSTON – In recognition of the firm’s trial successes in 2014, AZA, or Ahmad, Zavitsanos & Mensing, has earned selection as a Litigation Department of the Year for 2015  by the publishers of Texas Lawyer newspaper. The annual honor recognizes the Texas-based litigation groups that have excelled during the previous year based on courtroom results. […] 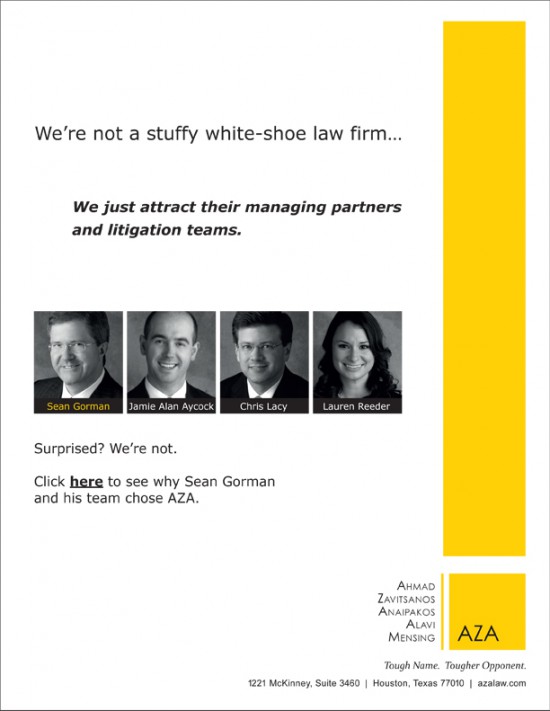