HOUSTON – Houston trial lawyer Sean Gorman, a partner at AZA or AZA, is being recognized as a leader in Texas general commercial litigation in the 2013 edition of Chambers USA: America’s Leading Lawyers for Business published by London-based Chambers and Partners. Mr. Gorman is an acclaimed litigator and former managing partner of a national […]

Believed to be largest software judgment ever affirmed by Federal Circuit HOUSTON – The U.S. Court of Appeals for the Federal Circuit in Washington, D.C., has affirmed a $391 million patent infringement judgment for Versata Software Inc., which was successfully represented by the Houston complex commercial litigation law firm AZA (or AZA) and co-counsel McKool […]

HOUSTON – The complex commercial litigation and intellectual property boutique AZA (or AZA) has hired three more highly qualified young lawyers from Big Law firms in Texas and Washington, D.C. Attorney Adam Milasincic, who earned the highest score on the Texas bar in July 2011, joins AZA from one of the nation’s largest firms. Paloma […]

HOUSTON – Accomplished attorney Alisa Lipski brings a decade of patent practice and a science background to the burgeoning intellectual property practice at Houston-based commercial litigation boutique AZA, or AZA. Ms. Lipski is licensed to practice before the U.S. Patent and Trademark Office and has handled numerous Markman hearings in District Courts around the country […]

New law school graduates earn more at AZA than those at many international firms HOUSTON – The Houston litigation boutique AZA, or AZA, has raised the salaries and guaranteed bonuses for the firm’s first-year associates to $170,000, significantly higher than what first-year lawyers are paid at most of the biggest law firms in the U.S. […] 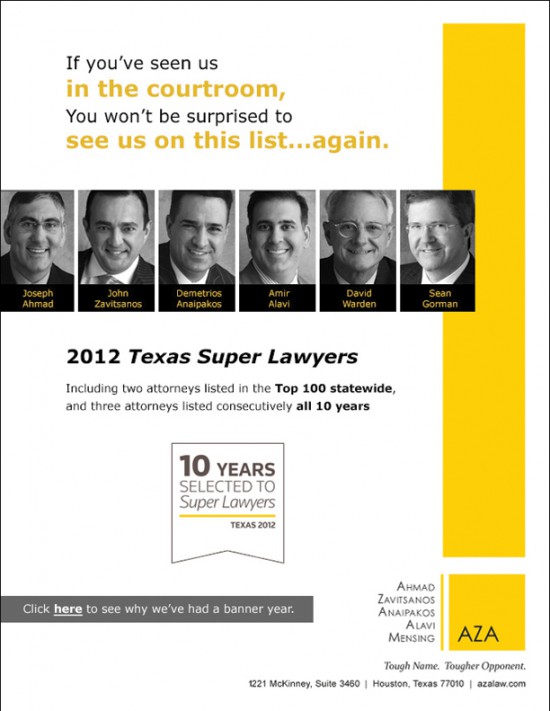