HOUSTON – Three attorneys from the complex commercial litigation and intellectual property boutique Ahmad, Zavitsanos, Anaipakos, Alavi & Mensing P.C., or AZA, have been named to Houston’s “Who’s Who in Energy” list for 2013.

Founding partner John Zavitsanos and partners Sean Gorman and Todd Mensing are all recognized as influential leaders in the energy industry by editors of the Houston Business Journal.

Mr. Zavitsanos, who earned selection to the exclusive list for the third time, was named one of the Top 100 leaders in the competitive Houston rankings.

“We are extremely proud of AZA’s track record in energy litigation, so it is gratifying to be on this list with so many of the best and brightest in the energy industry,” says Mr. Zavitsanos.

An acclaimed litigator, Mr. Zavitsanos has earned recognition in The Best Lawyers in America since 2006. He’s repeatedly named one of the Top 100 Lawyers in Texas by Texas Super Lawyers. He handles large, complex energy sector cases for a roster of clients.

Mr. Gorman and Mr. Mensing, both prior honorees in “Who’s Who in Energy,” were named finalists this year. Mr. Gorman is a noted trial lawyer who provides extensive experience in complex business litigation and arbitration matters for energy companies and other clients as both plaintiffs and defendants. Mr. Mensing focuses on complex commercial litigation in a variety of areas and has won significant verdicts for energy company clients.

The 2013 “Who’s Who in Energy” rankings were gleaned from nominations made to the Houston Business Journal and business journal partners in Austin, Dallas, Denver, Pittsburgh, San Antonio, St. Louis and Columbus, Ohio. The lists appeared in the publications’ late November editions.

AZA, or Ahmad, Zavitsanos & Mensing, is a Houston-based law firm that is home to true courtroom lawyers with a formidable track record in complex commercial litigation, including energy, intellectual property, securities fraud, construction and business dispute cases. AZA is recognized by U.S. News & World Report and The Best Lawyers in America as one of the country’s best commercial litigation firms in the 2014 listing of the nation’s leading law firms. National corporate counsel named AZA one of the country’s best in client service among law firms serving the Fortune 1000. AZA has been hired on many occasions by the same companies the firm has prevailed against at trial. Read more at https://azalaw.com. 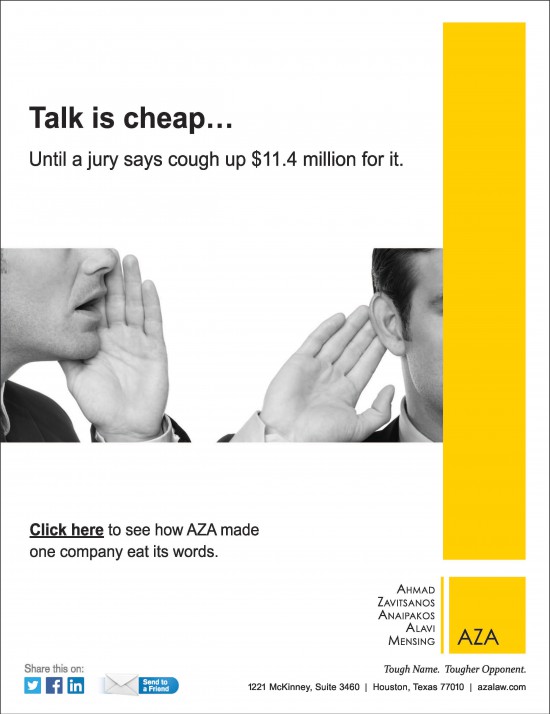