HOUSTON – Noted lawyer for executives Joseph Ahmad of Houston’s Ahmad, Zavitsanos, Anaipakos, Alavi & Mensing P.C. has been elected to the American Board of Trial Advocates, an elite group of the country’s leading judges and civil trial lawyers.

Mr. Ahmad earned the selection based on his efforts to “elevate the standards of integrity, honor, and courtesy in the legal profession,” according to ABOTA. “I’m proud become a member of this group of lawyers who take seriously our mission to respect the justice system and the people it serves,” Mr. Ahmad says. “This national society of attorneys strives to preserve and elevate the jury system.”

Board Certified in Labor & Employment Law by The Texas Board of Legal Specialization, Mr. Ahmad is routinely recognized for his legal work by the media and his peers in the legal community. He been named to The Best Lawyers in America listing of the country’s top attorneys for seven years in a row, and earned multiple selections in the Texas Super Lawyers listing of the state’s top lawyers. Along with firm partner and fellow ABOTA member John Zavitsanos, Mr. Ahmad also has been named as one of the Top 100 attorneys in Houston in the Texas Super Lawyers list.

A graduate of the University of Michigan Law School, Mr. Ahmad has tried more than 50 cases to verdict, and argued more than a dozen cases on appeal. He is a nationally recognized expert, including lectures around the country and frequent commentary in The Wall Street Journal, The New York Times, Houston Chronicle, television news reports, and other media outlet.

Ahmad, Zavitsanos, Anaipakos, Alavi & Mensing P.C. is a Houston-based law firm with an accomplished track record representing plaintiffs and defendants in complex commercial litigation matters. The firm’s seasoned attorneys provide clients with extensive expertise in internal corporate investigations, non-compete covenants and trade secret claims, employment litigation, oil & gas and energy law, products liability and catastrophic personal injuries, and real estate and construction litigation. AZA has earned national recognition as an “awesome opponent” based on a survey of general counsel who were asked what firms they hope their companies never have to face in court. 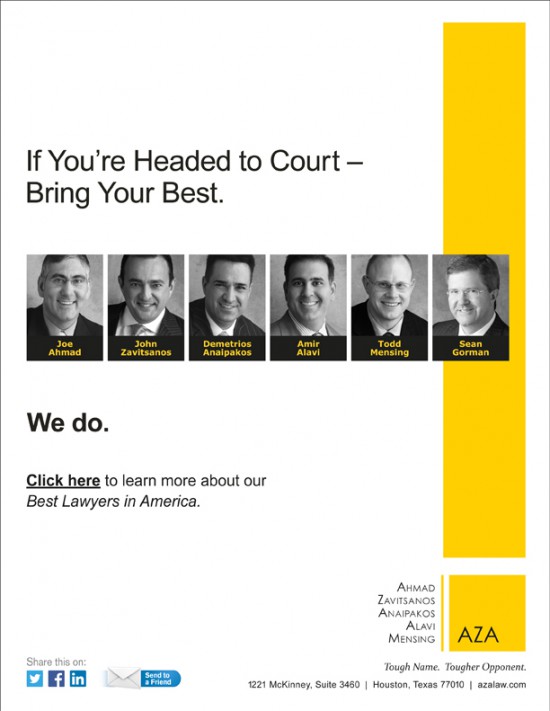