AZA partner Tim Shelby, who led the defense of OFSI in all three cases, commented, “It is rare to have a plaintiff abandon its trade secret claims like this, especially in the context of wanting injunctive relief against a competitor. This is a big victory for OFSI. This should bring an end to the trade secret litigation and clear the way for OFSI to complete Chapter 11 reorganization.”

Round one of this protracted battle started when IPSCO sued OFSI in federal court in June 2019 for misappropriation of trade secrets and breach of license agreements. The AZA team defeated requests by IPSCO for a TRO and a preliminary injunction. AZA then negotiated a non-confidential settlement that included a cash component that was less than half of OFSI’s cost to defend the case, as well as OFSI’s voluntary discontinuation of certain products. OFSI’s victory at the preliminary injunction stage and the later settlement received widespread media attention. Coverage includes: Rig Pipe Maker Can’t Bar Rival From Selling Product Amid Suit;  Rig Pipe Maker Bars Rival From Selling Alleged Knockoffs; and Trade Secrets Dispute Settles with Agreed Permanent Injunction on Eve of Trial (subscription required for all).

A few months after the settlement, IPSCO started Round 2 when it filed a pre-suit discovery lawsuit against OFSI in state court in Houston. IPSCO claimed it needed discovery to determine if OFSI had, among other things, failed to discontinue certain products and violated license agreements. Representing OFSI again, AZA argued that IPSCO cherry-picked similarities between products while failing to inform the court about significant differences between OFSI’s products and IPSCO’s products.

Due primarily to the impact of the COVID pandemic on the oil and gas industry, OFSI filed for Chapter 11 bankruptcy reorganization in May 2021. This happened before the state district court could rule on the pre-suit discovery petition.

Undeterred, on August 14, 2021, IPSCO initiated Round 3 when it filed six proofs of claims against OFSI and its subsidiaries, claiming that all the remaining products sold by OFSI were misappropriated or were produced in violation of the license agreements. IPSCO sought the recovery of significant monetary damages and potential injunctive relief that would prevent OFSI from manufacturing its products.

At OFSI’s request, AZA was appointed as Special Counsel for OFSI in the bankruptcy case. AZA objected to IPSCO’s proofs of claims and provided detailed evidence that OFSI had not misappropriated any trade secrets or breached the license agreements.

On November 9, 2021, IPSCO followed that up by voluntarily dismissing its pre-suit discovery lawsuit against OFSI.  This ended Round 2 of the litigation. 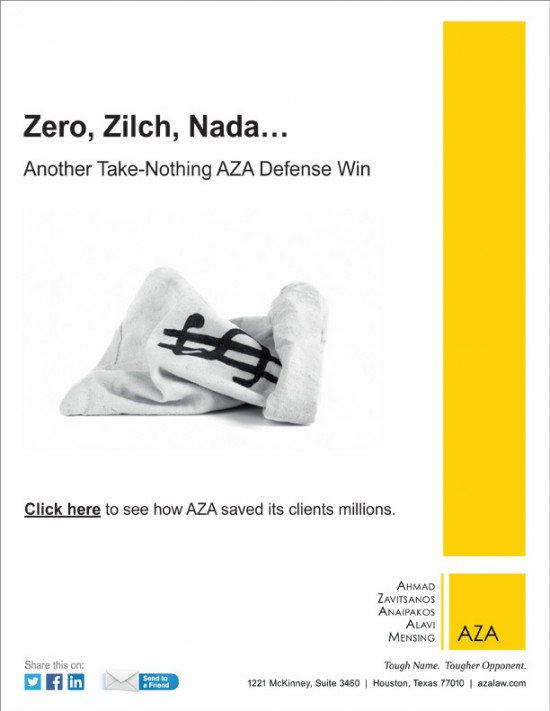