HOUSTON – AZA commercial litigator Neal Sarkar has been selected as the 2019 Outstanding Young Lawyer by the Houston Young Lawyers Association, a decades-old organization known for its community involvement and leadership.

Each year the Outstanding Young Lawyer award recognizes an attorney in the Greater Houston area who best demonstrates professional proficiency, service to the legal profession and service to the community.

“Neal is a terrific leader already, so it will be exciting to see him develop his talents even more in the coming years. I expect he will be a major pillar of our legal community,” said AZA co-founding partner Joe Ahmad, who nominated Mr. Sarkar for the honor.

Mr. Sarkar helped lead the effort to restart the Houston Lawyer Chapter of the American Constitution Society, through which he has helped coordinate volunteer lawyers responding to the havoc of Hurricane Harvey, the immigrant travel ban, and family separations at the border. Mr. Sarkar regularly pulls others into donating time and money for worthy causes.

“His legal work is first-rate, our clients love him, and his community work is unbelievable. We are infinitely proud to see him win this well-deserved honor,” said AZA co-founder John Zavitsanos.

Mr. Sarkar said he was humbled to receive the award. “I’m very aware of the young legal talent in Houston, so this is a singular honor,” he said. 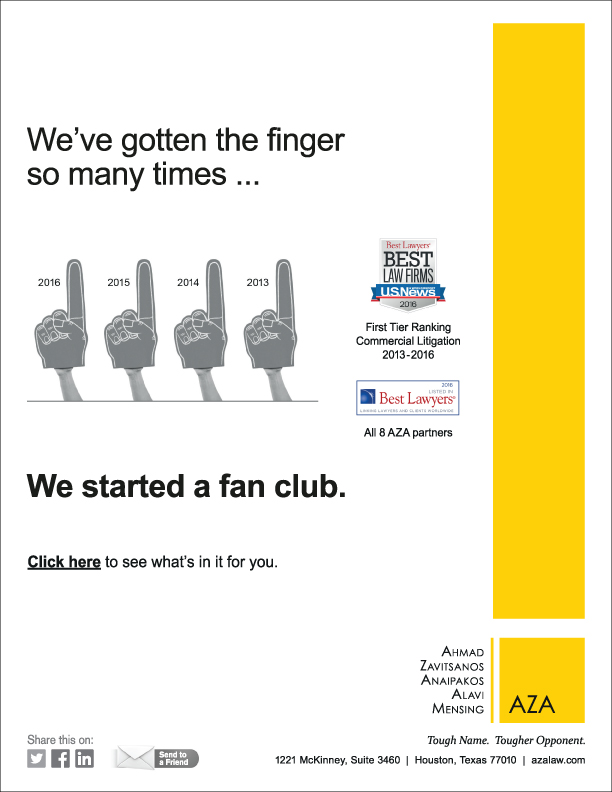