Home » News » Eleven AZA Associates Make US List of ‘Best Lawyers: Ones to Watch’ for 2021

HOUSTON – Eleven associates with trial law firm AZA, or Ahmad, Zavitsanos & Mensing, have been named to the list of “Best Lawyers: Ones to Watch,” which honors attorneys for outstanding professional excellence early in their careers.

“These smart young lawyers make us proud every day in the courtroom and in working with our clients,” said AZA founding partner John Zavitsanos. “They are a strong bench for our powerhouse trial team.” 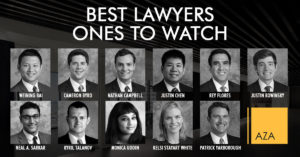 Mr. Bai represents plaintiffs and defendants in a variety of forums and involving different technologies. His clients range from tech companies to oil drillers. As one example, he successfully represented a U.S. tech company in the international enforcement and licensing of speech coding patents that included the filing of more than 25 cases in China. He has degrees in physics engineering and economics.

Mr. Byrd litigates breach of contract, noncompete agreements, trade secrets and patent infringement cases. In his first four years of practice, he tried five cases with claims and counterclaims in excess of $1 million, including two trial victories as the first-chair lawyer. In 2018, Mr. Byrd was one of only six associates in the U.S. recognized for “best in client service” by BTI Client Service All-Stars.

Mr. Campbell has navigated challenging trials from the beginning of his career. One of his first cases involved winning a $7.8 million jury verdict in a business disparagement case that received national news coverage. In 2018, Mr. Campbell successfully defended a motion for summary judgment on an eight-figure claim, in which he primarily drafted the briefing and argued the defense at the judgment hearing.

Mr. Chen has represented clients in federal courts across the country in patent infringement disputes involving semiconductor processing, flash memory products, integrated circuit packaging and electronic lighting controls. His practice also includes counseling on copyrights and trademarks. He has a degree in electrical and computer engineering.

Mr. Flores is a combat veteran and graduate of the U.S. Military Academy at West Point. He has tried 26 cases to verdict with 16 of those as lead counsel. A former JAG officer, his experience includes lead counsel on significant national security cases. He has represented clients in everything from labor and employment disputes to wrongful death claims and construction disputes.

Mr. Rowinsky focuses on complex civil litigation with a practice that includes contract disputes, employment disputes, tort claims, trade secrets, and oil and gas litigation. He has also maintained an active pro bono practice from his time in law school and has assisted clients with employment discrimination and civil rights claims.

Mr. Sarkar has experience resolving a broad range of business disputes, including claims in the hundreds of millions of dollars. He has handled breach of fiduciary duty and fraud claims, whistleblower cases, trade secret and noncompete clause litigation, and lawsuits in the oil patch and the construction industry. He was named Outstanding Young Lawyer of Texas for 2019 by the Texas Young Lawyers Association.

Mr. Talanov’s practice focuses on intellectual property matters, including patent and trade secret litigation involving a variety of technologies, such as oilfield drilling and completion tools, smart phones and medical devices. Before becoming a lawyer, he worked for five years as a process engineer focused on oil and gas and petrochemicals, employed by a global oil company and an engineering firm.

Ms. Uddin has an extensive case list involving a wide variety of commercial litigation and IP and patent disputes. She has successfully represented energy companies, semiconductor inventors and corporate executives in contract disputes, partnership break-ups, fraud claims, compensation disputes, and trade secrets litigation. She has tried cases in civil and bankruptcy courts and won summary judgment in a multimillion-dollar case.

Ms. White focuses on commercial litigation on both sides of the docket, including disputes involving trade secrets, non-compete agreements, employment, and commercial lending. Last year alone, she secured a six-figure award of attorneys’ fees for a client in a Texas state court bench trial; handled oral arguments before a U.S. appellate court; and secured a TRO in a trade secrets case.

Mr. Yarborough is experienced at representing individuals and businesses in all aspects of litigation, including depositions, motion practice, injunction hearings, mediation, arbitration, trial, and appellate oral argument. In recent years, he has won several jury trials, prevailed in a high-stakes academic grievance hearing, and successfully argued innumerable motions in state and federal court.

Using the same peer-review methodology employed by The Best Lawyers in America, the Best Lawyers: Ones to Watch list recognizes associates who have been in private practice for less than 10 years in the United States.

AZA, or Ahmad, Zavitsanos & Mensing, is a Houston-based law firm that is home to true courtroom lawyers with a formidable track record in complex commercial litigation, including energy, healthcare, intellectual property, and business dispute cases. AZA is recognized by Chambers USA 2020 among the best in Texas commercial law; by U.S. News – Best Lawyers’ Best Law Firms as one of the country’s best commercial litigation firms for eight years running; was named 2019 Litigation Department of the Year by Texas Lawyer; and was previously dubbed by Law360 a Texas Powerhouse law firm. National corporate counsel named AZA one of the country’s best in client service among law firms serving the Fortune 500 and 1000. 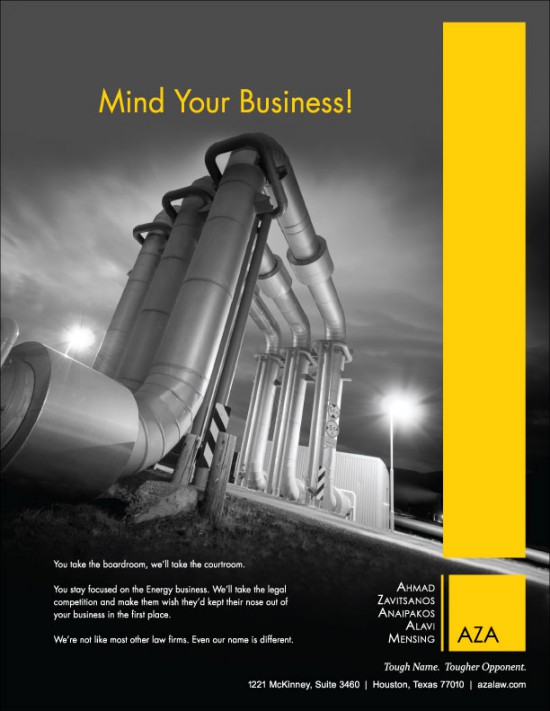