HOUSTON ─ AZA’s case before the Supreme Court of Texas involving confidentiality between patent agents and their inventor clients is the first of its kind in the nation to reach a state’s highest court, earning it notice by news service Law360 as one of the “Texas Cases to Watch in 2018.”

Of Counsel Jane Langdell Robinson of AZA, or Ahmad, Zavitsanos & Mensing, is leading the appeal, arguing that communications between patent agents and inventor clients are protected. That question has never been resolved in state court.

“It is understood that conversations with attorneys are confidential, and the same should apply to inventors when working with a patent agent,” said Ms. Robinson. “Inventors are at the heart of innovations that drive business and economic growth, and they deserve legal protections in the process of executing a unique idea.”

The case involves communications between inventor Andrew Silver and his patent agent in a lawsuit against Tabletop Media LLC over the patented technology for the Ziosk tablet service used in restaurants.

A number of patent groups and lawyers are closely following the litigation, judging from the volume of filed amicus briefs. The Law360 article (subscription required) notes that the outcome will have far-reaching implications.

“We are pleased that the significance of this case was recognized by Law360, and look forward to setting a precedent for other inventors represented by patent agents before the USPTO,” said Ms. Robinson.

Other AZA attorneys working on the case with Ms. Robinson are Demetrios Anaipakos, Tim Shelby, Edward Goolsby, and Ifti Ahmed.

The case is In Re Andrew Silver, case number 16-0682, in the Supreme Court of Texas.

AZA, or Ahmad, Zavitsanos & Mensing, is a Houston-based law firm that is home to true courtroom lawyers with a formidable track record in complex commercial litigation, including energy, intellectual property, and business dispute cases. AZA is recognized by Chambers USA 2017 among the best in Texas commercial law; by U.S. News – Best Lawyers’ Best Law Firms as one of the country’s best commercial litigation firms for 2018; and previously by Law360 as a Texas Powerhouse law firm. National corporate counsel named AZA one of the country’s best in client service among law firms serving the Fortune 1000. 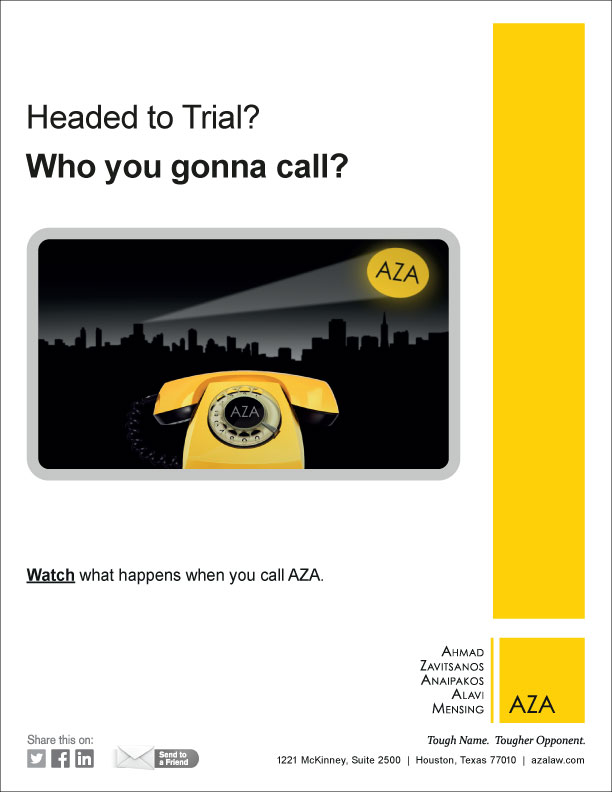