Mr. Ahmad is honored in the national 2022 list for his representation of executives in labor and employment litigation. The full list is here. Mr. Ahmad has for years been recognized nationally as one of the best lawyers in his field. He represents executives in a variety of matters, including breach of contract, trade secrets, covenants not to compete, breach of fiduciary duty and other matters.

He has authored a blog on executive issues called Legal Issues in the Executive Suite for more than 11 years dealing with issues like business continuity, clawback provisions, executive compensation, non-competes, trade secrets, whistleblowers and even workplace romance.

In announcing their 2022 lists, Lawdragon’s editors said the honorees were selected through a process, established in 2005, combining independent journalistic research with a robust, open nomination process. Final candidates are vetted by peers and competitors before the 500 are selected.

AZA, or Ahmad, Zavitsanos & Mensing, is a Houston-based law firm that is home to true courtroom lawyers with a formidable track record in complex commercial litigation, including energy, healthcare, intellectual property, and business dispute cases. AZA is recognized by Chambers USA 2022 among the best in Texas commercial law and intellectual property; by U.S. News – Best Lawyers’ Best Law Firms as one of the country’s best commercial litigation firms for 10 years running; has been named Litigation Department of the Year by Texas Lawyer; and was previously dubbed by Law360 a Texas Powerhouse law firm. 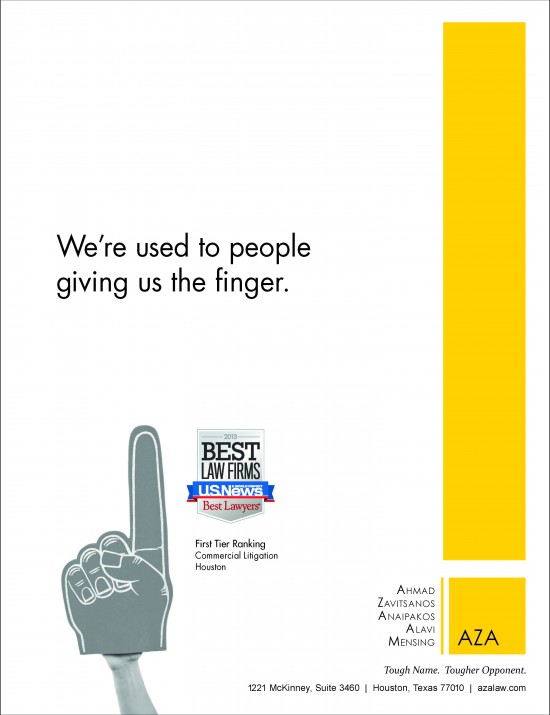