HOUSTON – The Houston litigation boutique Ahmad, Zavitsanos, Anaipakos, Alavi & Mensing P.C., or AZA, has raised the salaries and guaranteed bonuses for the firm’s first-year associates to $170,000, significantly higher than what first-year lawyers are paid at most of the biggest law firms in the U.S. and across the globe.

“We are small and lean, and we successfully go toe-to-toe with the biggest law firms in the country on a regular basis,” says AZA founding partner John Zavitsanos. “Like our bigger competitors, we’ve paid our first-year lawyers $160,000 until now. But we’re growing and doing more exciting work, and we want to attract even more top-level talent. We want law grads who are not interested in carrying someone else’s briefcase, but would rather stand up in court themselves.”

AZA now provides first-year lawyers a $165,000 salary and an additional guaranteed $5,000 bonus. For several years fewer and fewer of the nation’s biggest firms have guaranteed first-year salaries of even $160,000. According to the National Association for Law Placement, AZA’s new first-year salary provides far more buying power in Houston than in almost all other legal hubs.

“We strive to get associates in front of a jury during their first year at the firm,” says Mr. Zavitsanos. “So far, every new lawyer we’ve hired has had a significant role in a jury case within 12 months of joining the firm.”

The growing, 25-lawyer AZA focuses on complex commercial litigation and intellectual property cases. The firm prides itself on employing only trial-ready lawyers. AZA is frequently hired on the eve of trial by companies looking for fast and effective solutions, and the firm often is retained by general counsel from companies AZA has previously opposed in court.

Nationally recognized for excellence in commercial litigation by the publishers of U.S. News & World Report and The Best Lawyers in America, AZA also is hailed by general counsel in national surveys for client service and tenaciousness in the courtroom.

AZA hires laterals from the country’s largest law firms, where young lawyers typically are not given the opportunity to practice in court as quickly as they can at AZA. 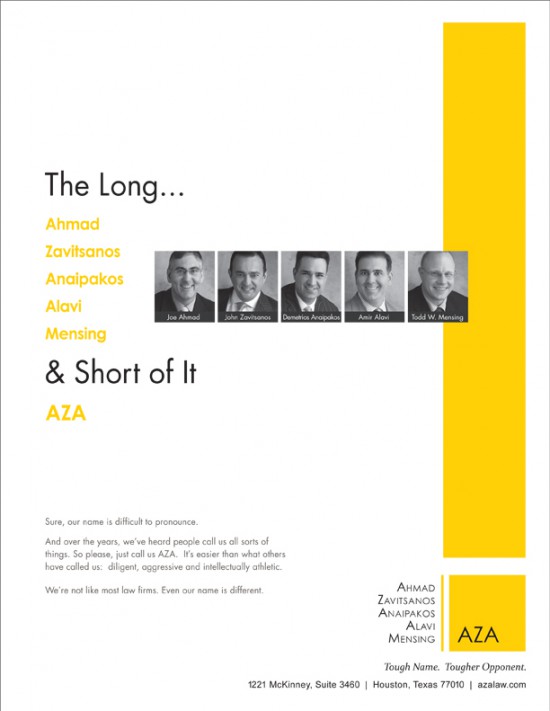