HOUSTON – With the headline “It’s All Greek To Him,” The Houston Lawyer magazine featured a story on AZA founding partner John Zavitsanos’ Greek heritage in its January/February 2019 issue.

The story was written by John’s longtime friend, Houston lawyer Allen Tanner. It chronicles how John was brought to the U.S. from Greece as a child by his family. They started out in Chicago where John learned English simply by attending public school. He was so grateful for his father’s guidance over the years that when he graduated from the University of Michigan Law School, John had his father’s name put on his diploma, the story notes.

When he moved to Houston, John met his wife Joni through the Greek church, where he continues to be involved both locally and internationally. John’s four children all speak Greek, and he still has a home in Greece, usually managing to stay there each July while working remotely. 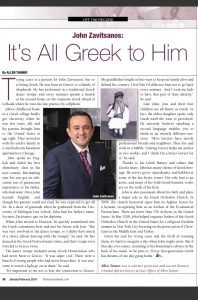 His Greek connections and heritage are important to him. “Most lawyers have mostly professional friends and neighbors. They live and work in a bubble. Visiting Greece helps me anchor in two worlds, and I think I’m a better lawyer for it,” he says.

The article features two pictures of John. One shows him as a child in Greece, wearing a classic Greek dancing dress. In the online version of the magazine, John is also shown as an adult. But the print edition of the magazine mistakenly ran a picture of AZA’s co-founder Joe Ahmad. See the article here.

That led to an avalanche of good-natured jokes within the firm about photobombing, before-and-after plastic surgery shots, and so on. It was the kind of reaction you’d expect from a firm that jokes it was founded by “two Greeks and a sheik.”