Firm co-founders Joe Ahmad and John Zavitsanos were named along with partners Todd Mensing, Jane Langdell Robinson, and Monica Uddin. Lawdragon said this list was “dedicated to those attorneys who excel representing principally corporations and other organizations in litigating claims” in a variety of specialties.

The legal media company “selected members of this guide from a record number of submissions and independent research focused on recent cases and defense verdicts or settlements, as well as attorneys whose sustained excellence in trials is nothing short of remarkable.”

Mr. Zavitsanos has also been named once again to Lawdragon’s 2022 list of 500 Leading Plaintiff Financial Lawyers in America. He is honored for his representation of plaintiffs in commercial litigation, which includes several recent jury wins in the healthcare sector.

Mr. Ahmad has also been named to Lawdragon’s 2022 list of 500 Leading Corporate Employment Lawyers. Mr. Ahmad has for years been recognized nationally as one of the best lawyers who represents executives in a variety of matters.

AZA, or Ahmad, Zavitsanos & Mensing, is a Houston-based law firm that is home to true courtroom lawyers with a formidable track record in complex commercial litigation, including energy, healthcare, intellectual property, and business dispute cases. AZA is recognized by Chambers USA 2022 among the best in Texas commercial law and intellectual property; by U.S. News – Best Lawyers’ Best Law Firms as one of the country’s best commercial litigation firms for 10 years running; has been named Litigation Department of the Year by Texas Lawyer three times including for 2021; and was previously dubbed by Law360 a Texas Powerhouse law firm. 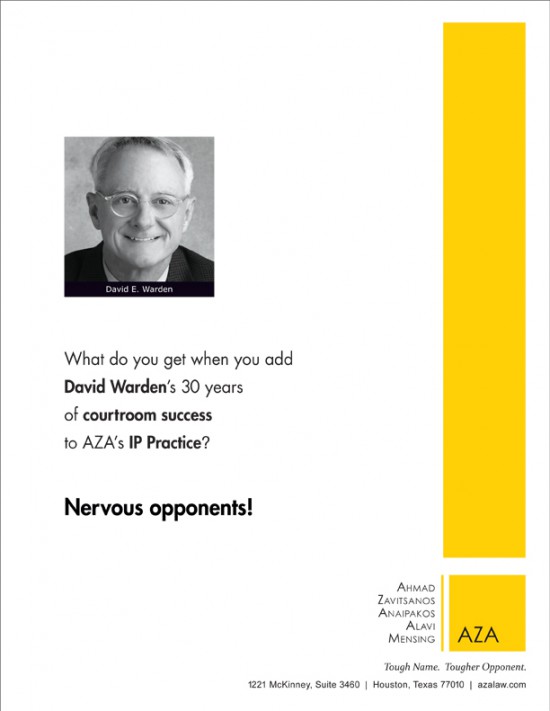