Mr. Zavitsanos was interviewed about AZA’s reopening early during the pandemic and why he finds Zoom calls and working from home don’t work as well for his trial team as they do for some other businesses. AZA went to trial six times in 2020 and the trial teams need to be together, he said.

“It is just not possible to have the kind of collaboration and have the kind of seamless progression in the way you try these cases. With everyone working from home it can’t be done,” he explained.

He said Zoom calls aren’t organic discussions because people can’t cut each other off or talk over each other the way people do in real life. There is Zoom fatigue from extended discussions on that platform in part because of this, he said.

Mr. Zavitsanos explained that as trial approaches there are numerous twists and turns, and the collaborative group needs to be together to creatively develop solutions rather than have 17 Zoom calls a day.

And as for mandating vaccinations of all employees, he said they brought in a doctor to explain why this is necessary and didn’t think any employee had the right to endanger others because of a political or other belief.

You can hear the full interview here.

AZA, or Ahmad, Zavitsanos & Mensing, is a Houston-based law firm that is home to true courtroom lawyers with a formidable track record in complex commercial litigation, including energy, healthcare, intellectual property, and business dispute cases. AZA is recognized by Chambers USA 2021 among the best in Texas commercial law and intellectual property; by U.S. News – Best Lawyers’ Best Law Firms as one of the country’s best commercial litigation firms for nine years running; has been named Litigation Department of the Year by Texas Lawyer; and was previously dubbed by Law360 a Texas Powerhouse law firm. National corporate counsel named AZA one of the country’s best in client service among law firms serving the Fortune 500. 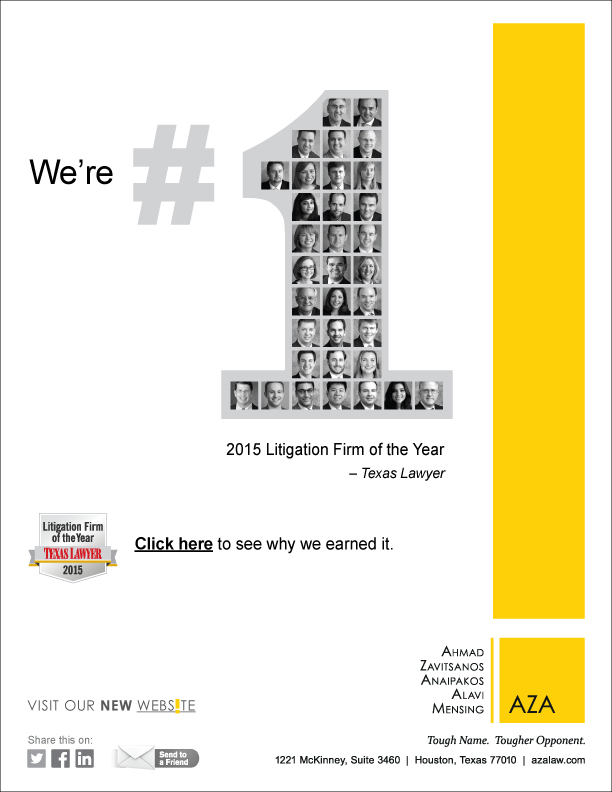