GALVESTON – After four weeks in trial, AZA’s client, the daughter of a hardworking red snapper fisherman, agreed to a $5.1 million settlement in a probate dispute over revenue from her father’s fishing interests.

The settlement reached as jury deliberations were underway amounted to five-times actual damages against the defendants. The defendants had offered $0 to settle the dispute before trial.

“The handwriting was on the wall for these defendants. We wanted to hear from the jury, but the offer of more than $5 million was something our client, the daughter of the late fisherman, understandably wanted to accept,” said AZA co-founding partner John Zavitsanos, who tried the case with partner Monica Uddin.

The late fisherman’s talent for red snapper fishing was awarded with what turned out to be a golden ticket. Before his death, his employer gave him a one-half percent interest in the fishable Gulf Coast snapper population through an Individual Fishing Quota (IFQ).

The probate dispute centered on what happened when a cancer ridden fisherman trusted defendants to lease his IFQ and pay him fairly for it. He wanted to leave the burgeoning asset to his children and grandchildren, and his daughter filed the lawsuit on behalf of her father’s estate to get that fair payment.

During the trial, jurors heard how the red snapper IFQ, which was portioned out in 2008 to control snapper fishing in the Gulf of Mexico, has since become the kind of million-dollar asset a New York City taxicab medallion was before Uber. Jurors were told how the defendants breached their fiduciary duties to the fisherman.

The daughter and estate were also represented by Tim Beeton of Beeton Shabot in Galveston.

AZA, or Ahmad, Zavitsanos, Anaipakos, Alavi & Mensing P.C., is a Houston-based law firm that is home to true courtroom lawyers with a formidable track record in complex commercial litigation, including energy, healthcare, intellectual property, and business dispute cases. AZA is recognized by Chambers USA 2021 among the best in Texas commercial law and intellectual property; by U.S. News – Best Lawyers’ Best Law Firms as one of the country’s best commercial litigation firms for nine years running; was named 2019 Litigation Department of the Year by Texas Lawyer; and was previously dubbed by Law360 a Texas Powerhouse law firm. National corporate counsel named AZA one of the country’s best in client service among law firms serving the Fortune 500. 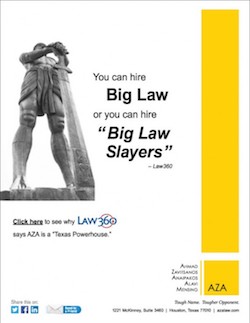