In late 2017, Apache initiated arbitration against Wagner Oil to recover over $15 million in legal fees and reasonable settlement costs of environmental litigation in Louisiana. Apache sought recovery from Wagner Oil under indemnity provisions in an agreement where Apache sold leases to Wagner Oil.

After the expedited arbitration started, Wagner Oil filed a declaratory judgment action denying any liability to Apache in state court in Tarrant County and moved to stay the arbitration. Apache countered with a motion to compel arbitration. Wagner Oil prevailed at the trial court level.

The 2nd Appeals Court opinion said: “The parties agreed to a broad indemnification provision, and it is clear from the [contract]’s plain language that Apache did not want any liability other than that which it specifically retained. . ..”  The 2nd Court of Appeals further held, “The parties also agreed to a broad, far-reaching arbitration procedure covering ‘[a]ny and all disputes’ except for those involving engagement in any third-party actions.”
Wagner Oil appealed to the high court claiming the extensive arbitration provision was somehow neutered. AZA argued that the request for review was nonsensical.

“This was purely a delay tactic by Wagner,” AZA partner Tim Shelby told Law360. “We are very excited to get back to the arbitration.”  Mr. Shelby represented Apache along with AZA partners John Zavitsanos and Jane Langdell Robinson and AZA associates Foster C. Johnson and Nathan Campbell.

AZA, or Ahmad, Zavitsanos & Mensing, is a Houston-based law firm that is home to true courtroom lawyers with a formidable track record in complex commercial litigation, including energy, intellectual property and business dispute cases. AZA is recognized by Chambers USA 2019 among the best in Texas commercial law; by U.S. News – Best Lawyers’ Best Law Firms as one of the country’s best commercial litigation firms for eight years running; was named 2019 Litigation Department of the Year by Texas Lawyer; and was previously dubbed by Law360 a Texas Powerhouse law firm. National corporate counsel named AZA one of the country’s best in client service among law firms serving the Fortune 500 and 1000. 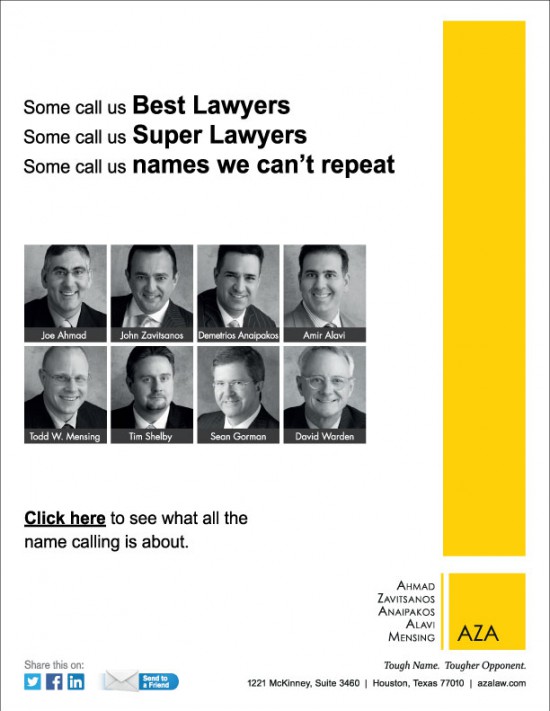