HOUSTON – AZA was once again chosen by Texas Lawyer magazine as the best boutique-sized litigation department in Texas. This is the third time the firm has earned the honor in just the last eight years.

AZA was named best Texas boutique litigation department in 2019 and in 2015. And in 2017, the firm won a specialty practice award from the legal publication. Texas Lawyer said it is recognizing firms for “their meaningful work and achievements in 2021,” honoring “powerhouse practices” in Texas. See the awards list here (subscription required).

“AZA is indeed a trial powerhouse. Lots of firms claim they try cases often, but we really do. We go to trial almost every month. In 2021 our lawyers tried 13,” said John Zavitsanos, a co-founder of Ahmad, Zavitsanos & Mensing.

Among those trials were two jury wins that will undeniably change the way emergency room physicians are paid nationally, and one resulted in a $75 million verdict against the largest insurer in the nation.

AZA has excelled in appellate courts, too. The firm’s cases led to two new precedents involving hostile work environment rulings from the U.S. Fifth Circuit Court of Appeals. The rulings helped the firm’s client, a former Houston firefighter. In another appellate example, AZA lawyer and former judge Daryl Moore argued two Texas Supreme Court cases for the city of San Antonio in one day last year. The firm won both, leading to decisions that strengthened governmental immunity for Texas cities.

AZA is a Houston-based law firm that is home to true courtroom lawyers with a formidable track record in complex commercial litigation, including energy, healthcare, intellectual property, and business dispute cases. AZA is recognized by Chambers USA 2022 among the best in Texas commercial law and intellectual property; by U.S. News – Best Lawyers’ Best Law Firms as one of the country’s best commercial litigation firms for 10 years running; has been named Litigation Department of the Year by Texas Lawyer three times including for 2021; and was previously dubbed by Law360 a Texas Powerhouse law firm. 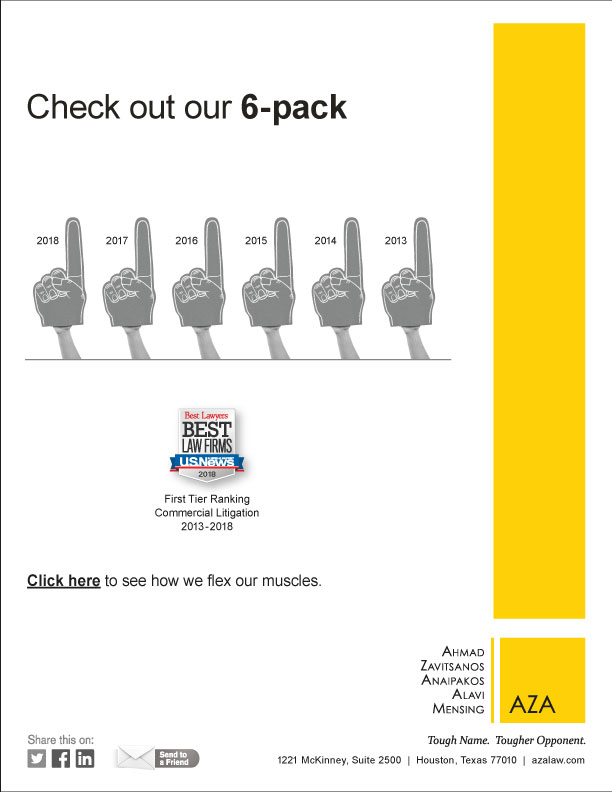