Seven Young AZA Lawyers Ranked among Best Lawyers: Ones to Watch for 2023

HOUSTON – Seven lawyers with AZA are being recognized in the 2023 edition of The Best Lawyers in America as among the top young attorneys in the U.S.   Seven firm lawyers earned the special distinction as Best Lawyers: Ones to Watch, which recognizes leading lawyers in practice less than 10 years. Those honorees are […]

HOUSTON – With criticism growing for how lawyers are abusing mid-case appeals, the Texas Fourteenth Court of Appeals today found that a local court was correct to toss a contractor’s frivolous attempts to use Texas’ anti-SLAPP law to delay an impending trial setting. The case now headed back to the trial docket of the 113th […]

HOUSTON – A $120 million discrimination lawsuit against oilfield equipment supplier National Oilwell Varco LP (NOV) has died on appeal as the U.S. Supreme Court declined to consider a petition for review filed by eight former NOV employees. The employees lost their discrimination case in a Houston trial in 2015. They had argued to the […]

HOUSTON – The Wall Street Journal reported that one of the country’s largest unions is trying to remain in bankruptcy as it confronts a $7.8 million defamation judgment against it won by Professional Janitorial Service of Houston Inc. in a Harris County court. The Texas branch of the Service Employees International Union (SEIU) asked a […]

HOUSTON – A Harris County jury has delivered a $5.3 million verdict against the Service Employees International Union (SEIU) for wrongly disparaging Professional Janitorial Service of Houston when the company refused to recognize the union without a secret ballot by its employees. The judge added $2.5 million in prejudgment interest for a total of $7.8 […] 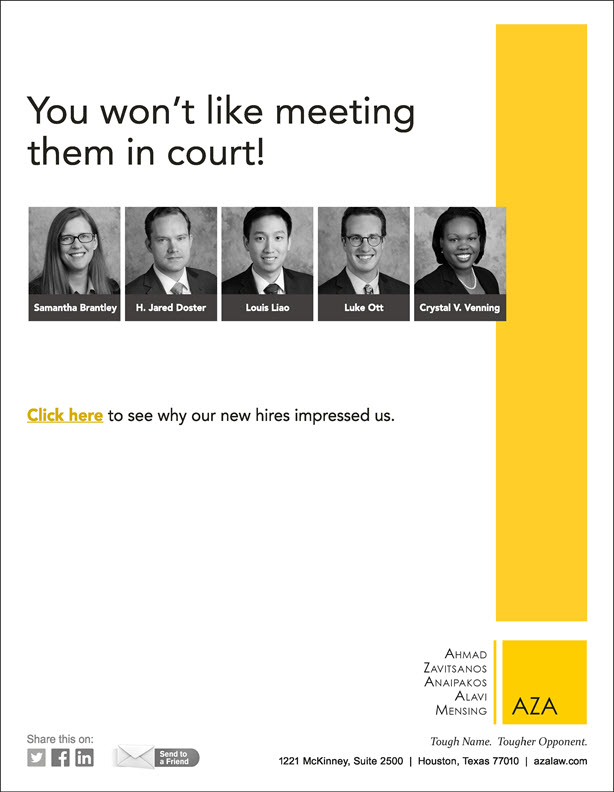