HOUSTON – The U.S. Court of Appeals for the Federal Circuit reversed a lower court’s ruling for Google LLC in a dispute over three spreadsheet patents asserted by Data Engine Technologies LLC, a unit of Acacia Research Corp. The appellate court ruled, in a precedential decision, that a Delaware court was incorrect when it tossed […]

HOUSTON – In an article for Texas Lawbook, Rey Flores, an associate at AZA or Ahmad, Zavitsanos, Anaipakos, Alavi & Mensing P.C., wrote about his experiences as a combat veteran in the Middle East and what we can all do to inspire each other. In a bylined article titled, “Señor, usted es un orgullo Hispano,” […]

HOUSTON – The Texas 14th Court of Appeals upheld a judge’s dismissal of a defamation lawsuit filed by Landry’s Inc. restaurant chain and its Downtown Aquarium that claimed the Animal Legal Defense Fund defamed Landry’s by criticizing the treatment of four endangered white tigers kept at the aquarium. The appellate court found that Harris County […]

HOUSTON – All eight partners and one lawyer who is of counsel with the commercial litigation firm Ahmad, Zavitsanos, Anaipakos, Alavi & Mensing P.C., or AZA, have earned selection to the 2018 Texas Super Lawyers listing. Two of those lawyers rank among the top 100 attorneys in Texas. AZA partners and co-founders Joe Ahmad and […]

HOUSTON – AZA is ranked among the nation’s top mid-sized law firms and among the top 10 for quality of work and top 15 for hiring selectivity by Vault rankings. Vault, which just released its 20th law firm ranking guide to help law students and lawyers, included AZA in its “Top 150 Under 150.” This […]

HOUSTON – John Zavitsanos, a founding partner of Houston trial lawyer boutique Ahmad, Zavitsanos, Anaipakos, Alavi & Mensing P.C. or AZA, announced today that the firm will match the $195,000 salary and bonus for new lawyers started by Big Law. But he said the cost to AZA clients will not go up. The added expense […]

AZA Has Many Houston Clients Among Nations’ Most Valuable Branded Companies

HOUSTON – Ahmad, Zavitsanos, Anaipakos, Alavi & Mensing P.C., or AZA, has many clients among the Houston companies recognized on Brand Finance’s list of 500 Most Valuable American Brands for 2018. The Houston Business Journal reported on the Bayou City’s top brands in “Study: These Houston companies rank among America’s most valuable brands” and the […]

HOUSTON – Tim Shelby, a partner in Ahmad, Zavitsanos, Anaipakos, Alavi & Mensing P.C., or AZA, was appointed to a three-year term on the State Bar of Texas’ Oil & Gas Pattern Jury Charges Committee. The committee updates and revises the way the law is typically presented to juries in Texas trials and members must […]

HOUSTON – The National Law Journal and VerdictSearch rated AZA’s $41.6 Million jury win for client Prime Natural Resources in a Wellsure insurance dispute as one of the top verdicts nationally for 2017. The Harris County jury verdict in the breach of contract case was listed as the 46th largest in the U.S. The list […]

HOUSTON – AZA lawyer Cameron Byrd has been recognized with only five other law firm associates nationwide for providing superior service to clients in BTI Client Services All-Stars 2018. BTI Consulting Group interviewed more than 350 in-house counsel for feedback on attorneys who exhibited high-quality service through responsiveness and a heightened sense of their clients’ […] 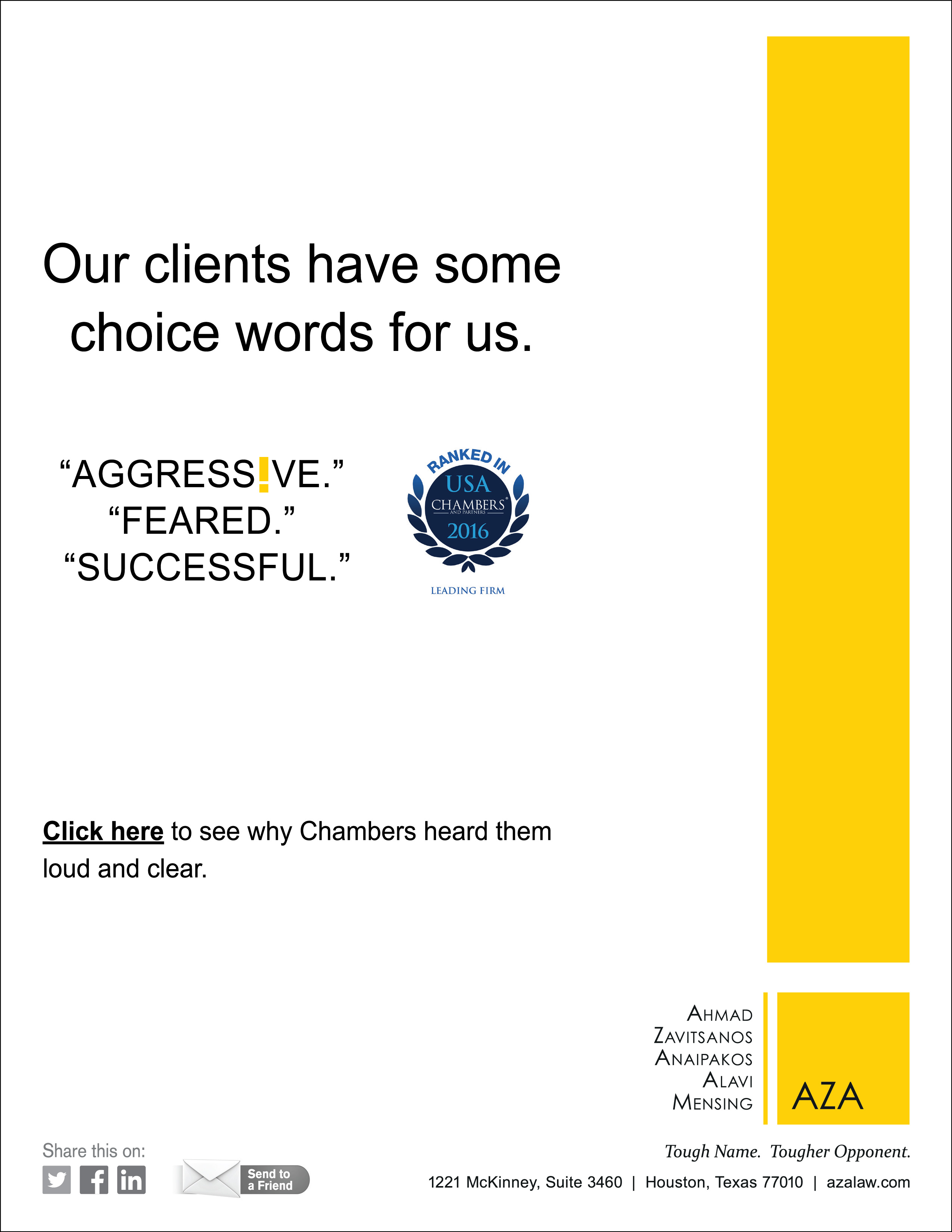