Weining Bai’s fluent Mandarin has helped AZA break through into Chinese patent work. He’s on the phone at odd hours, early in the morning and late at night, talking to his Chinese counterparts and making what used to be thought of as a dead zone for American law firms a fertile ground for AZA. 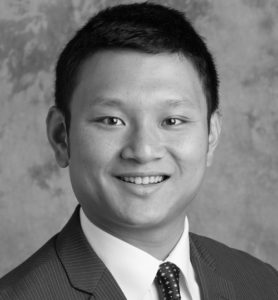 “Weining is what legal scholars call a total ‘bad ass.’ Not only is he technically brilliant and fluent in Mandarin, but he is a superb tactician, wonderful writer and incredible advocate. He is our secret weapon, and a force to be feared,” partner Demetrios Anaipakos said of Weining, an AZA associate since 2016.

“We were monetizing a portfolio of incredibly complicated voice-coding patents developed by a team of PhD electrical engineers in Canada. Weining knew the patents cold. He could discuss concepts I struggled to pronounce like he was talking about last night’s Astros game. I will never forget late one night when we had a Zoom call with a major Chinese telecommunications manufacturer, and Weining debated — and pummeled — their PhD expert . . . all while speaking Mandarin the entire time. I got my popcorn, sat back and watched. Weining is ridiculous,” Demetrios said

Weining moved from China to New Orleans at age 11, the only Chinese kid in an inner-city school of mostly black kids. His only English was some colors, numbers and how to ask for the bathroom. Back then, he felt his major problem beyond learning the language was learning the culture — like how the lunchroom worked and that it was extremely uncool to follow the dress-code rules.

“I don’t do terrified. School was a 15-hour day with prep, school and postschool work,” he said of his assimilating experience. He did such an excellent job that by the time he got to high school, he wound up a lineman on the football team. “I wasn’t a small kid. I didn’t know all the rules, but I could rush and tackle the guy with the ball. I could block without holding a jersey,” Weining said. His family eventually moved from New Orleans to Houston, but he remains a New Orleans Saints fan.

Looking to learn more about his new country and because of a generous college scholarship offer, he chose the preppy, legacy-heavy Washington & Lee University in the southern culture of Virginia. He studied physics, engineering and economics. With an eye toward law school, he was active in the Honor Advocates group. It defended students accused of cheating, drinking and other conduct violations. During this time, he was the only undergrad who tried and won these cases. He did well on the LSAT and wound up in the Northeast at the prestigious University of Pennsylvania Law School, getting a taste of yet another part of his new country. Weining got his green card while in college and he is now a U.S. citizen.

Partner Amir Alavi recalls when Weining was a second-year associate, the firm had a Markman pretrial patent hearing against Big Law Kirkland & Ellis. As the lawyers got ready to argue one of the terms, the lead lawyer from the other side stood up to introduce his junior partner and said it was his partner’s first Markman argument. Amir stood up and introduced Weining as a second-year associate and noted that this was also his first Markman hearing argument. “Weining crushed the Kirkland partner. It wasn’t even close. That confirmed what all of us knew: that Weining was a superstar in the making,” Amir said.

Weining is a standout at the law firm, helping coordinate the 20 or so Chinese cases, by flying to China often before the pandemic and by phone since and working on a lot of other cases as well. “The cases here take intellectual complexity and vigor. They are high stakes. As an associate, this firm delivers on the promise to give you diverse and hands-on experience,” Weining said.

Despite his hard work and devotion to his clients, he’s certainly not one-dimensional. Weining is married, plays the violin and poker, loves trivia contests and is a sports enthusiast. His work has been varied too. He’s focused not only on patent cases but also trade secret and commercial cases for a variety of clients, including telecom, energy, music, and healthcare companies.

Partner Todd Mensing has worked closely with Weining and agrees with others that he’s a rare talent. “Weining practices at the level of a 20-plus-year attorney. It’s gotten to the point that I think he may be the Benjamin Button of lawyers.”