HOUSTON – Rey Flores and Jason McManis have been named partners in the AZA law firm.

Mr. Flores is a trial lawyer and combat veteran who brings to the courtroom the same focus, creativity and will to win that he displayed during his time on active duty with the U.S. Army.

Mr. McManis is a skilled trial lawyer who helps individuals and businesses navigate some of their most difficult problems. He has extensive experience handling high stakes patent, trade secret, employment, and business disputes across the oil and gas, healthcare, commercial and residential real estate, automotive, and aviation industries. 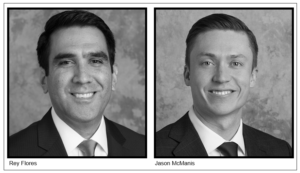 “The firm and our clients are well served by these two new partners whose broad experience adds great depth to our bench,’’ said AZA co-founder John Zavitsanos.

Mr. Flores was recognized in the 2021 list of “Best Lawyers: Ones to Watch” in the field of commercial litigation. Mr. Flores was also selected to the 2020 Texas Rising Stars list for excellence in business litigation.

He previously worked as both a prosecutor and criminal defense attorney and as lead counsel on some of the most complex, significant, and high-profile national security cases in the United States. Mr. Flores was previously appointed as a special prosecutor by the State of Texas.

Mr. McManis has been named a Texas Rising Star for four consecutive years. Rising Stars, a list compiled by Thomson Reuters’ Texas Super Lawyers, honors leading attorneys age 40 and younger and those who have been in practice no more than 10 years.

He is a graduate of the University of Virginia School of Law and, before that, Dartmouth College where he was a four-year letterman on the baseball team.

He was a key member of a trial team that won a December $62.65 million jury verdict in Nevada on behalf of emergency room doctors cheated out of pay by United Healthcare, the nation’s largest insurer.

Equally experienced representing both plaintiffs and defendants, Mr. McManis has taken on some of the largest companies in the world as lead counsel and as a key member of small trial teams. He has helped secure some of the largest patent infringement jury verdicts in the country in recent years, including one that has been recognized in the Texas Lawyer Verdicts Hall of Fame.

Mr. McManis has fought for company founders to get their rightful share after their business partners had unlawfully forced them out of the company, successfully defended business partners against dissolution and breach of fiduciary duty claims, helped numerous businesses enforce employment agreements and protect their valuable intellectual property and confidential information, and helped physician groups successfully pursue claims against large insurance companies for systematic underpayment.

AZA, or Ahmad, Zavitsanos & Mensing is a Houston-based law firm that is home to true courtroom lawyers with a formidable track record in complex commercial litigation, including energy, healthcare, intellectual property, and business dispute cases. AZA is recognized by Chambers USA 2021 among the best in Texas commercial law and intellectual property; by U.S. News – Best Lawyers’ Best Law Firms as one of the country’s best commercial litigation firms for nine years running; has been named Litigation Department of the Year by Texas Lawyer; and was previously dubbed by Law360 a Texas Powerhouse law firm. National corporate counsel named AZA one of the country’s best in client service among law firms serving the Fortune 500. 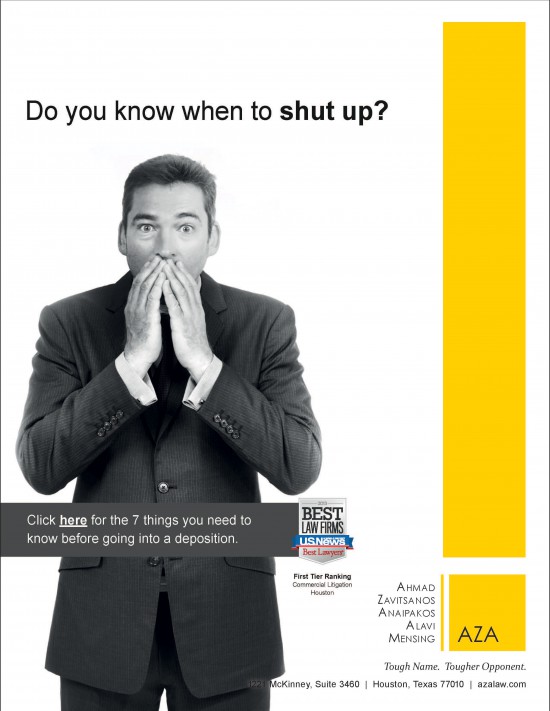