HOUSTON – AZA’s client, one of the world’s largest oilfield services companies, saw plaintiffs drop their multimillion-dollar catastrophic personal injury case against it after AZA filed a summary judgment motion on the client’s behalf.

The case stemmed from a 2019 accident in which a roofing contractor fell through a skylight while performing repair work on the roof of an industrial facility owned by AZA’s client. Also named in the suit were the general contractor and the injured party’s employer.

The various plaintiffs, including the roofing contractor and numerous relatives, dismissed the case, which had been removed from state district court to federal district court, with prejudice. They did so after AZA filed a summary judgment motion making clear that the lawsuit, although filed a day before the statute of limitations expired, was not served on AZA’s client with the due diligence required by law. It took nearly four months for the company to be served.

“As much as we love to go to trial at AZA, it is always gratifying to help a client see a multimillion-dollar lawsuit completely dismissed with prejudice pre-trial,” said AZA partner Rey Flores. He worked on the case with partner Todd Mensing and associate Hilary Greene.

Mr. Flores noted that although AZA is known for its trial and appellate prowess, it also frequently helps clients get cases tossed on summary judgment, both on procedural arguments such as this one and on merits-based arguments following discovery. In just the last few months, AZA has obtained five such results for its corporate clients.

AZA is a Houston-based law firm that is home to true courtroom lawyers with a formidable track record in complex commercial litigation, including energy, healthcare, intellectual property, and business dispute cases. AZA is recognized by Chambers USA 2021 among the best in Texas commercial law and intellectual property; by U.S. News – Best Lawyers’ Best Law Firms as one of the country’s best commercial litigation firms for nine years running; has been named Litigation Department of the Year by Texas Lawyer; and was previously dubbed by Law360 a Texas Powerhouse law firm. 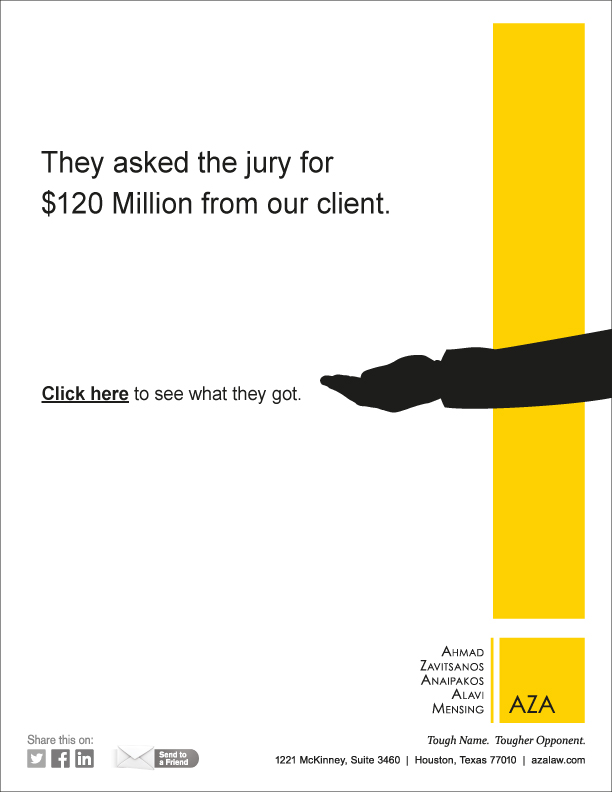