“These two lawyers are among the best litigators I know and we’re proud to have our already tough-to-pronounce name become even longer to include them,” says John Zavitsanos, one of the founding partners. “We have to call ourselves AZA day to day or we couldn’t keep a receptionist.”

All five name partners are Board Certified by the Texas Board of Legal Specialization. The firm, formed in 1993, is a collection of high-achieving, creative lawyers who thrive in the courtroom and provide clients with the power that comes from being truly trial-ready. AZA lawyers are known both for their prowess in legal battle and their attention to clients.

He is AV-rated by Martindale Hubbell and a Life Fellow of the Texas Bar Foundation. He has been consistently recognized in the annual Texas Super Lawyers list and as a “Top Lawyer in Houston” by H Texas magazine. Prior to joining AZA, Mr. Alavi was the general counsel of a privately-held company with over 5,000 employees.

Mr. Mensing focuses on complex commercial litigation in a variety of areas, including energy, real estate and construction matters, trade secrets, and breach of contract and business tort cases. He also represents executives in employment disputes, and companies and individuals in catastrophic personal injury cases.

Mr. Mensing earned a spot on the Texas Super Lawyers list in only his fifth year of practice after previously being honored in the Texas Rising Stars list. He has also been named a “Top Lawyer in Houston” by H Texas magazine. Mr. Mensing is a member of the Million Dollar Advocates Forum, which includes attorneys who have secured verdicts in excess of $1 million.

AZA, is a Houston-based law firm that is home to true courtroom lawyers with a formidable track record in complex commercial litigation. AZA is one of only 32 firms in the U.S. to be recognized as “awesome opponents” in a nationwide poll of corporate general counsel who were asked to name the law firms they hope their companies never have to face in court. In fact, AZA has been hired on many occasions by the same companies the firm has prevailed against at trial. 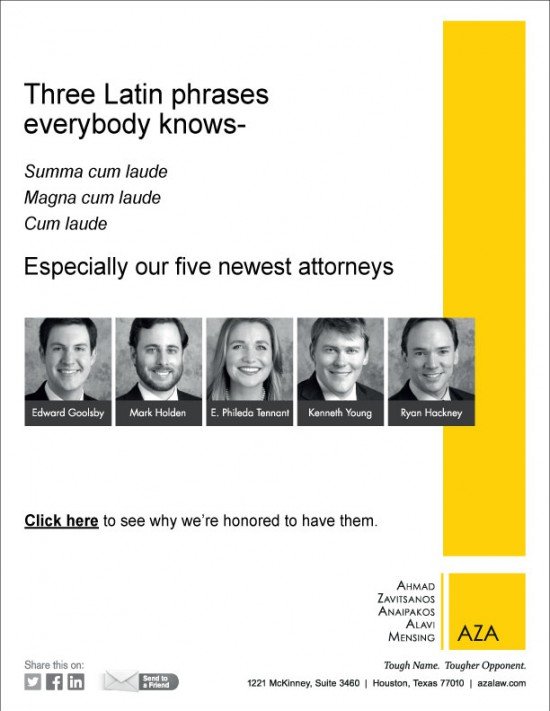